We Can Do This.

By now, you have likely heard something about the debate over a large New Deal-era mural at George Washington High School; it’s received a lot of media coverage locally, nationally, and internationally over the past few months (I’ve included several links at the bottom of this post in case you haven’t followed the issue closely). The board initially made a unanimous vote in June to paint over the mural, and then the issue was brought back to the board in the middle of August where a majority voted to cover the mural with panels instead.

I’ve been going back and forth on whether or not I should publicly weigh in on this issue. Every time I have been at a social, political, or any kind of public event in the past couple of months, at least one person has brought up the issue to me. It is not only our public school community that is paying attention to how SFUSD, and we as a city, navigate it. As someone who wants to engage our community in productive conversations and keep us focused on outcomes that will serve all members of our community, I want you to know that I’m willing to weigh in on and act on tough and controversial issues.

We have to work harder to find solutions that uphold two important San Francisco values: 1) to recognize and support historically underserved and undervalued people, and 2) to embrace artistic expression as a potential catalyst for change. Neither leaving the mural exactly as it is -- nor destroying it permanently -- does both.

I’ll go through some of my thinking below, and then share with you one idea for a solution that upholds both of the values above. 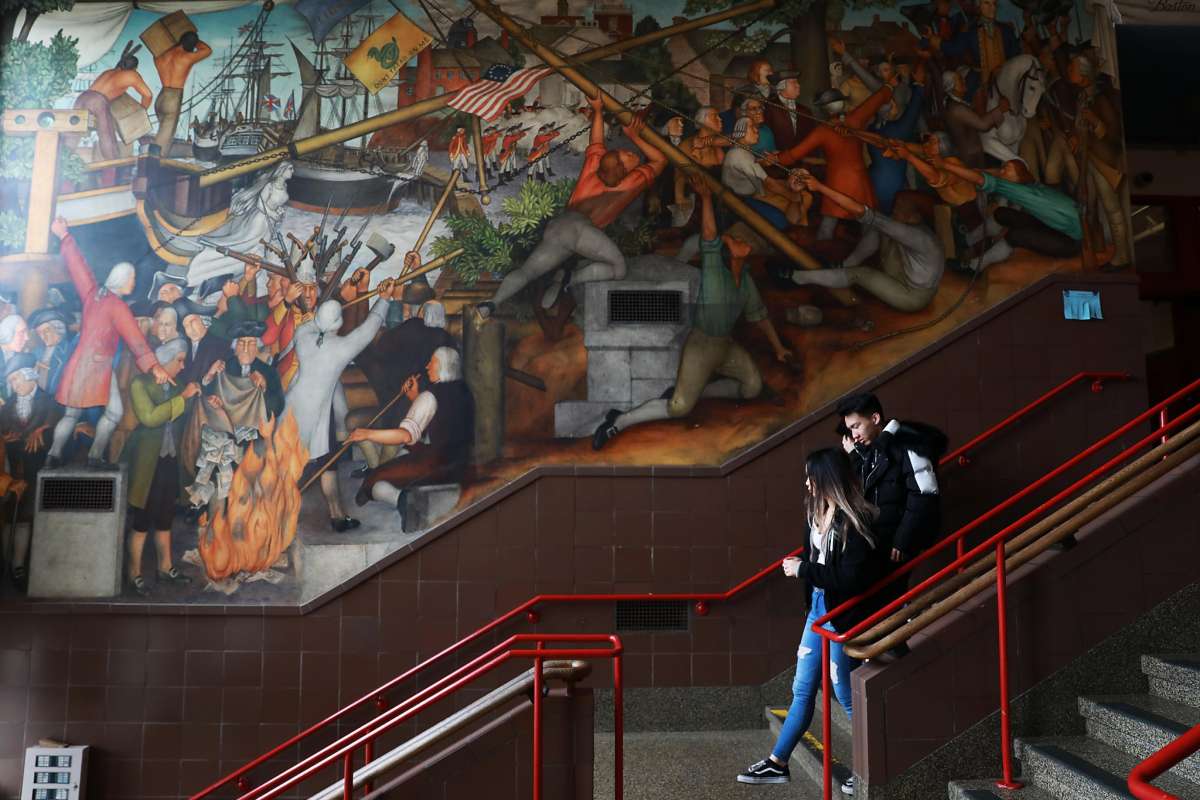 The “Life of Washington” mural by WPA artist Victor Arnautoff is in George Washington High School’s entryway and was meant to be provocative. It was intended to be a catalyst for thought, reflection, conversation and reaction about the history of our country that, in 1936, was often glazed over in favor of a saccharine fantasy that only chose to speak of the courage and innovation of America’s founding fathers, rather than to also lay bare the truth about and impacts of their colonization and oppression. This fresco was created to expose what many people at that time didn’t want to see. For its time, it was considered progressive.

We have many people, including students and marginalized groups of people, who are triggered and deeply offended when they see the mural’s images (which, frankly, students don’t have a lot of choice about doing). I believe the students who have been speaking up for many years who say that having to pass by the scenes of violence depicted towards Native Americans and African Americans, and art that perpetuates stereotypes about the ways these groups are often portrayed, has caused harm -- no matter the intention of the artist. And this is even more painful amidst the national rhetoric that devalues voices and lives of People of Color. Our schools should be spaces that are safe and supportive and enable our students to learn.

Educational institutions are also supposed to be places where we learn about real history and truth, at least that’s what I want education to be. Shouldn’t we want conversations about our country’s real history to be discussed in those walls? Of course. No one disputes that. But as far as I know, these murals have existed without explanation, plaques, guided analysis, reflection or correction for decades, and the school and district have missed opportunities to integrate them into curricula and student learning. Instead, generations of students have walked by and experienced these images without any guidance or support.

Destroying Public Art (or not)

I also believe that government agencies should not get to unilaterally decide to destroy public art -- including art that is controversial or offensive to some members of our communities. It sets a dangerous precedent when government officials subjectively determine what is "appropriate." Artwork, in every form, can be a critical way for humans to process events and experiences, and create movements for change -- sometimes more powerfully than words alone.

I don’t believe that if we remove this art we are collectively at risk to forget our country’s troubling past. But I do think that this artwork is an important part of a larger story about the journey this country has been on to recognize the atrocities the original colonizers committed, and then hopefully to do what is possible to repair generational harm -- a story that we have to keep telling so that we are spurred to actions that mitigate the ongoing impact.

Additionally, if we choose to paint over and permanently destroy the murals, we leave ourselves with no options for the future should a better solution to the situation present itself.

We need a solution that both honors our students’ experiences and doesn’t destroy art.

The last school board vote on this issue was intended to support a compromise. Instead, the board president has been criticized for his proposal to cover the mural with panels painted with new student-led artwork (without destroying the original), and members of our community who have strong views on either side of the debate (paint it down vs. leave it untouched where it is) are both angry. SFUSD has been threatened with lawsuits and there is talk of a 2020 ballot measure that would address decisions around public art.

The idea of a compromise is on the right track, though. I just don’t think we’ve found the best compromise yet.

But it turns out we’re not alone in grappling with these difficult issues.

There are communities around this country who have dealt with similar “what do we do with controversial and problematic representations in art” questions; you can read about some of those here on pages 4-7. I’d like to find out what worked and didn’t work in their decision-making processes, and how they resolved concerns in their communities, and then apply those in San Francisco. The Arnautoff mural won’t be the last time we face this issue, so we need to figure out how to do this effectively.

I’ve heard several interesting ideas for addressing concerns around this mural, and am particularly partial to something like what the American Museum of Natural History did for the “Old New York Diorama,” because it corrects problematic representations and honors Native people, and builds upon the original piece (click the link above for an interactive page showing you what it’s like up close). 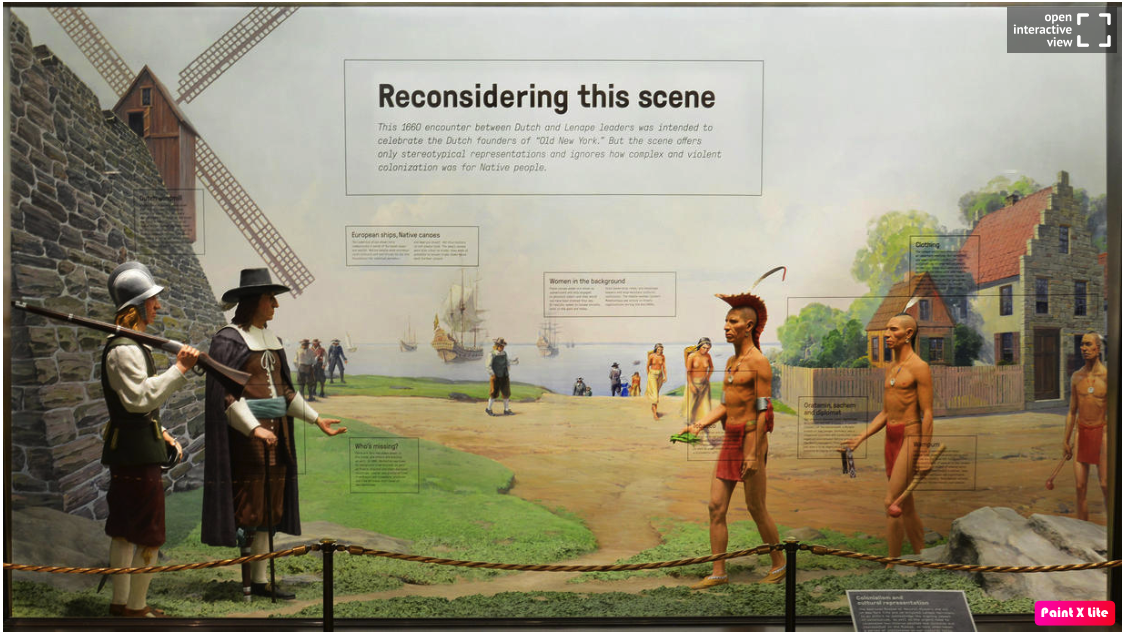 Imagine if we covered the Washington murals with glass -- either all or just in certain places, and added corrections and commentary in written text or images on that glass layer.

For instance, where the Native Americans are depicted in stereotypes, we could

We should work with Native American leaders and organizations to convey important information in their own words and with their guidance.

We could add overlays of text near the enslaved Africans and

Again, we should work with the African American community to come up with ideas for the text that honors and respects their experiences, including current students.

We could also lay out facts about Washington and other leaders depicted in the frescoes -- what their roles were in the building of the country, how many enslaved people they had and until when, how they interacted with indigenous people, and who were abolitionists and who weren’t.

This kind of commentary on the Arnautoff mural would further expand the narrative from the time of its creation, and beyond the response murals by Dewey Crumpler that were commissioned by SFUSD in the 1960s when the Black Students Union and Black Panthers advocated for the removal of the Arnautoff mural. The Crumpler murals call attention to the accomplishments and leadership of People of Color throughout America’s history.

We could consider other ideas, too. Some people have proposed creating a light projection that would continually overlay and add commentary to the existing mural. We could also consider covering certain sections of the mural or placing a more temporary covering over its entirety so that the murals are accessible for docent-led public viewings and discussions on regular occasions, in a more museum-like format that people can choose to participate in. And whatever we choose, the board has also already agreed to digitally archive the images -- perhaps that digital image could be projected life-size on a wall in a San Francisco museum so that the public would have access to the image.

We can do this. We can both consider, honor, and respect voices from the members of our Native American and African American communities, and preserve public art. Let’s find this better solution together, and then get back to investing ourselves in the hard work of providing these same students with an educational experience to be proud of.

Background of the mural and controversy surrounding the Arnautoff mural:

The “Life of Washington” mural at Washington High School was painted by WPA artist Victor Arnautoff in 1936 and, not surprisingly, depicts the life of George Washington. Arnautoff thought it was important to use this mural as a vehicle to shed light on and criticize our country’s history of oppression and colonization. In addition to the people who have been weighing in on this highly charged issue since the 60s, we’ve seen a recent influx of voices in anticipation of the vote the SFUSD school board took at the end of June to destroy the murals, including students and school leaders, Washington High School alumni, artists, community leaders, and elected leaders. The issue has received LOTS of media coverage, from local to national, as well as several opinions published.

A sample of this coverage: